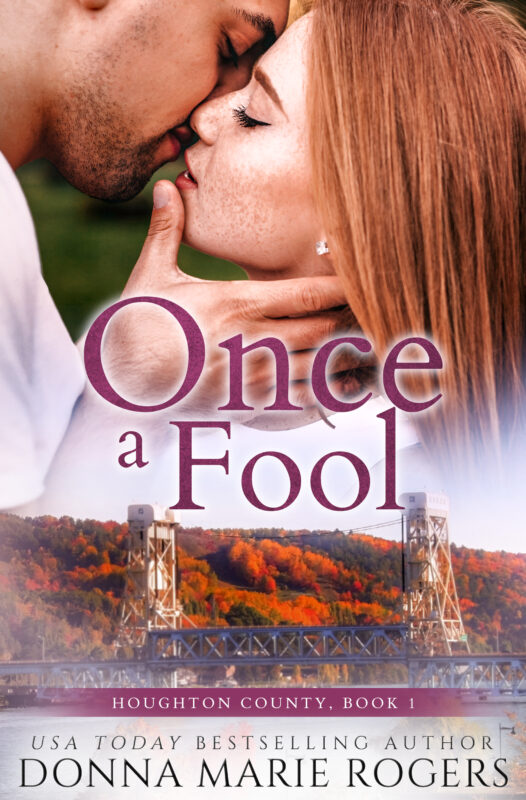 Can the town’s feisty new librarian breathe new life into a jaded Army veteran who’s all but given up on love?

Harley Lawson finds herself all alone in the world after the loss of her beloved grandmother. While packing up her things, she comes across an old bible, and is stunned to discover she has an older brother out there—but where? Her only lead points to the U.P of Michigan, so she moves to Houghton County to begin her search. But the task is much harder than she’d anticipated, and it isn’t until she meets the annoyingly handsome Officer Cameron Nichols that she finds her next clue—and much more than she bargained for.

Cam returned home from serving his country only to discover his wife pregnant with another man’s child. After a bitter divorce, he joins the police force and buys a little cottage on the lake where he keeps to himself. However, his matchmaking mother has other ideas, and the cute new librarian is her latest obsession. Cam soon finds himself just as enthralled by the sexy redhead, but when she reveals some unexpected news, he reacts in the worst possible way. Could past insecurities destroy his chance at the future he’s always dreamed of?

Feeling a bit awkward, Cam wasn’t sure if he should stay until she kicked him out, get to know her a little better, or take his leave before he somehow managed to stick his big-ass foot in his big-ass mouth. Again.

“So, are you free this Saturday night? I was thinking about inviting your family over for that dinner. I found my Nana’s recipe for baked chicken and rice, and she always made green bean casserole with it and Rhode’s bread.”

“Rhode’s bread? Sounds fancy.” He loved the fact she wanted to spend more time with his family.

Which also worried the shit out of him. Puzzling, to say the least. As was the sudden urge to kiss her.

She grinned. “It’s a brand of frozen bread dough. You just thaw, rise, and bake, and you have a hot loaf of bread. Nana would make it for dinner at least once a week, and for breakfast, too, alongside scrambled eggs with green peppers, onions and cheese, and thick-cut bacon.”

“That sounds really good.” Man, those blue eyes are gorgeous. And her perfectly bowed lips… “I love thick-cut bacon.”

“Maybe I’ll make it for you sometime.”

Unable to resist her a moment longer, Cam set the picture on the small table beside the couch before grasping her hands and gently tugging her forward. He lightly gripped her waist, and was lost in those glacial pools of blue as she gazed up at him with uncertainty.

“I’m not doing anything for breakfast tomorrow,” he informed her in a low tone before leaning in and capturing her mouth. A soft gasp surprised him, so he pulled back slightly, then brushed his lips across hers with just the slightest pressure.

A soft whisper of sound escaped her as she leaned in and pressed her mouth to his. A surge of emotion took him by surprise. He cupped her face, remembering what she’d told him, and slanted his mouth across hers.

Her lips were silky smooth, and he touched his tongue to the seam, seeking entrance, wanting to taste her so badly he was damn near dizzy with it.

Another soft sigh, and then she opened for him. Cam didn’t waste a second slipping inside. She touched the tip of her tongue to his, then slid her arms around him. Cam grunted his approval. It had been so long since he’d kissed a woman, truly kissed her.

He moved his hands around to cup the back of her head, running his tongue along hers, tasting, stroking, flicking, her hesitant response the sexiest thing he’d ever experienced.

His pulse thrummed in his veins as he crushed her in his arms, molding her against the hard proof of his desire while deepening the kiss. He wanted her, more than he’d ever wanted another woman. The thought freaked the hell out of him, even while he prayed she felt the same. The notion of having to leave, of having to walk out that door right now, was something he couldn’t even fathom.

She whimpered in his arms, her hands moving to clutch his forearms as she tore her lips free. Disappointment settled in his gut like a lead boulder.

“I’m sorry,” she said on a breathy whisper.

“No, I’m sorry.” He brushed his thumb across her cheek, then dropped his hands and took a step back. “Seems I have little control where you’re concerned.”

“I liked it. The kiss. And I like you, despite the voice in the back of my head telling me to run for the hills. It’s just… Look, I’m not the casual sex type.”

He recaptured her hands, retaking the step to bring them toe to toe again. “There is nothing casual about the way I feel about you, Harley.”

Share
Facebook Twitter Google+
Preview
Disclosure of Material Connection: Some of the links in the page above are "affiliate links." This means if you click on the link and purchase the item, I will receive an affiliate commission. I am disclosing this in accordance with the Federal Trade Commission's 16 CFR, Part 255: "Guides Concerning the Use of Endorsements and Testimonials in Advertising."