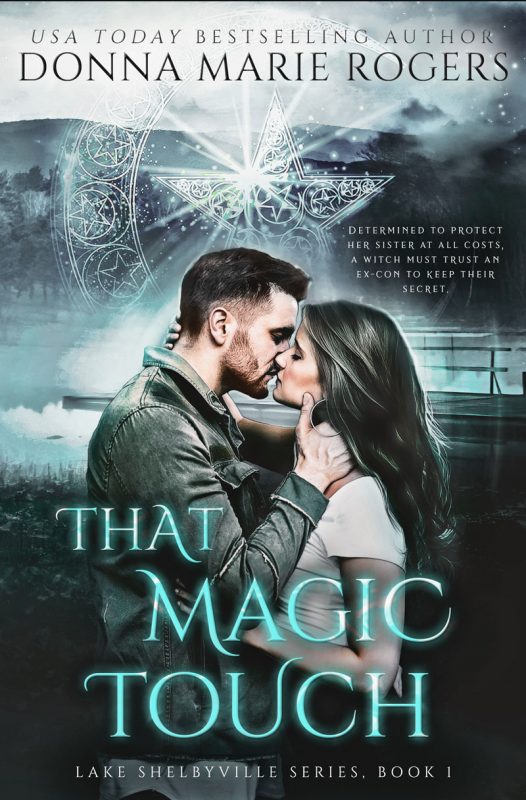 A witch determined to protect her sister at all costs must trust an ex-con to keep her secret.

Living in a small town, Mia Grey has a hard enough time keeping her own unique healing abilities secret, let alone those of her younger sister, whose telekinetic powers grow stronger by the day. Steering a moody teenage witch down the right path while working full-time in her bait shop/convenience store isn’t easy—and her pre-occupation with their mysterious new neighbor certainly isn't helping matters. When fate literally puts his life in her hands, she has no choice but to risk her secret in order to save him.

Jack Sutton spent seven years behind bars for a crime he didn’t commit. Longing for a fresh start, he heads to the picturesque town of Shelbyville, Illinois in search of a long-lost aunt, his only family connection. But trouble has a way of following him. Knocked unconscious during an apparent robbery, he comes to with a throbbing head, an empty cash register, and no memory of the attack. One thing’s clear—his beautiful neighbor knows a lot more than she’s letting on.

BUY IT HERE
About the Book

As if she’d conjured him with her thoughts…

He strode forward until they were only a couple feet apart. So close Mia could smell his unique scent—masculine and spicy.

“I just got home and noticed the light on in the garage, which I swear I turned off.” He stuck his hands in his front pockets. “What are you doing out here in the dark?”

“Just some last-minute preparations for the tournament. I had a late call for a boat, so I needed to make sure my extra motor turned over. Plus, I like to sit out here sometimes at night after Kat’s in bed. It’s quiet. I can think in peace.” Think about you, which I can’t seem to stop doing.

Jack reached out and tucked a stray lock of hair behind her ear, sending her pulse racing.

“And what is it you think about out here all alone?”

The sexy timbre of his voice washed over her like a soothing rain. She shivered in response.

“Cold?” Misinterpreting her reaction, he closed the gap between them and wrapped his arms around her.

“A little.” The mid-sixties temps had nothing to do with her reaction to his nearness, but she had no intention of telling him that.

BUY IT HERE
Share
Facebook Twitter Google+
Preview
Disclosure of Material Connection: Some of the links in the page above are "affiliate links." This means if you click on the link and purchase the item, I will receive an affiliate commission. I am disclosing this in accordance with the Federal Trade Commission's 16 CFR, Part 255: "Guides Concerning the Use of Endorsements and Testimonials in Advertising."