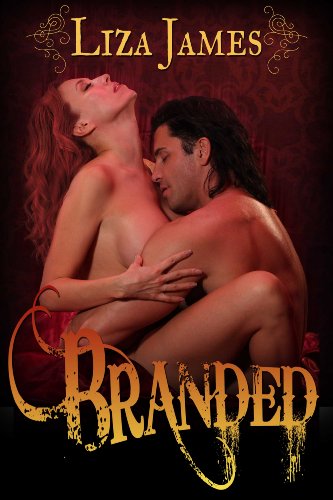 When young widow Lily McCourt is attacked by a couple of neighboring ranch hands, Trace Hammond comes to her rescue, just as he has since the day her husband died. For Lily, it was love at first sight the moment the ranch foreman drifted onto the Triple M Ranch. She’s sure Trace feels the same. She’s also certain his loyalty to her dead husband has kept him from acting on his feelings. If she wants to break the reluctant cowboy’s stubborn sense of honor, she’ll have to shed more than her petticoats to brand him as her own.

Trace poured one last bucketful of hot water into the tub and turned to face her. “I’ll give you your privacy.

Do you need anything else before I take my leave?”

I need you, Trace. “I…could you stay? Just until I’m through bathing?”

He cleared his throat and gave a curt nod. “I’ll put on some coffee.”

Relief swelled her chest, and a hesitant smile lifted the corners of her lips. Genuine concern shone from his eyes. Trace cared for her. Desired her. There was just no mistaking the look in his eyes the few times she’s caught him staring at her.

But he’d kept his distance due to propriety. Or so she’d assumed. It had been almost a year since her husband’s death, and Trace had yet to do more than settle his intense gaze on her. Lily knew she’d have to make the first move if she hoped to keep this man in her life. Something was holding him back, and although it would take every drop of courage she possessed, she planned to seduce Trace.

Only somewhat shaken by what had happened earlier–her mother always said she had a strong constitution–Lily stripped out of her clothes, pinned her long, coppery tresses up in a bun, and sank into the steaming water.

She leaned back with a sigh of contentment.

Behind her, she could hear Trace moving around the kitchen, probably heating up the leftover stew from dinner.

She needed to get him in here, but he’d never set foot over the threshold without a darn good reason.

Guess she’d have to give him one.

Share
Facebook Twitter Google+
Preview
Disclosure of Material Connection: Some of the links in the page above are "affiliate links." This means if you click on the link and purchase the item, I will receive an affiliate commission. I am disclosing this in accordance with the Federal Trade Commission's 16 CFR, Part 255: "Guides Concerning the Use of Endorsements and Testimonials in Advertising."